How to Choose the Right Blockchain for your project

What is the Best Blockchain to build on?

Choosing the right blockchain to build on can be a daunting task.  There are currently well over 1000 active blockchains on the internet; each defined by a unique combination of properties across dozens of variables.  Scalability & transaction fees are just the beginning of this puzzle.

Choosing the wrong blockchain can make or break a project in any number of ways; from exponentially increasing the cost of development, to destroying the ability to operate with network congestion & exorbitant transaction fees.  Simple projects with a single token might fair well by starting with one of the “best blockchains” like Near or Solana.  More complex projects that are looking to build a new, multi-token economy or on-board an entire ‘non-crypto-native’ customer segment, may want to take a minute to educate themselves on what they don’t know they don’t know.

This is where we come in. We’ve invested countless hours researching & cataloging new blockchain technologies. Earlier this year we were contracted to design a DLT protocol for a massive multi-vendor economy. Despite how much we already know, it was no simple task choosing the best blockchain to build on. We started the year with ~ 80 blockchains in our R&D database, now it’s well over 200.

Every project has unique requirements and goals. Before you start building, it is important to know when and where it is appropriate to re-invent the wheel. If the function in question isn’t part of your unique value proposition, then it’s almost always best to use the wheel that already exists.

In order to have confidence you are building on a foundation that will support the future growth of the business, one must define the blockchain properties that are critical to the project’s success, compile a list of platforms that meet those requirements, and get validation from the community & development teams that build on it.

The following Blockchain Report is a truncated version of our latest work preparing to build an advanced DLP project. We chose to publish this document to help others understand their options, and take a strategic approach to building their dapp. Herein we shall assemble the Requisite Blockchain Properties for our sample project [OSP], consider the various Types of Blockchains to narrow our search; and generate a short-list of the Best Blockchains to build on.

We shall use our sample project “OSP” throughout this document as a reference point for making determinations. OSP is a multi-vendor DAPP that requires a complex multi-token economy designed to support millions of users, NFTs and micropayments.

What features & values are critical to the project’s success?  We’ll use this list to sort & filter our blockchain database later on.  For now, the primary features required for OSP are marked below.

Great, now we have a better sense of what we’re looking for & some questions to help us narrow the list down later. The next logical step is to find an online comparison chart of all blockchains that we can use to sort by features.

***Weeks of searching turn up scattered fragments of information***

There is no single source of truth for comparable blockchain features. So we built one. This is a snapshot of our database of the top 244 blockchains by market cap: 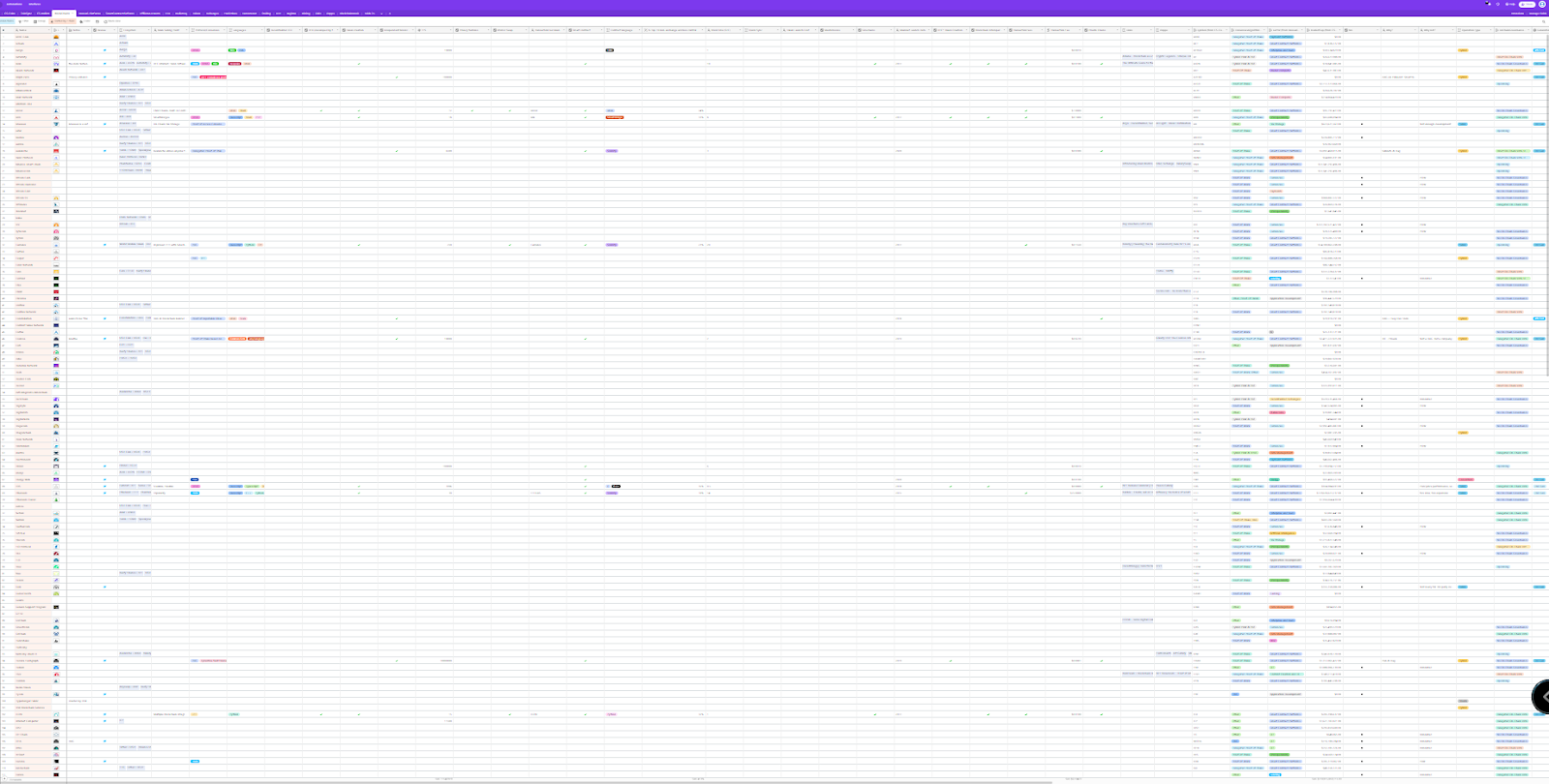 *If you would like a sortable view of this table for your own research, leave a comment below. We would very much like to make this an open tool for others to contribute missing data. All we need is a little capital and interest to make it so.

Fully populating this chart would be a full-time job for any individual. As much as we would love to have it, we don’t need to see all the variables for all chains to determine what’s best for OSP.

Let’s narrow the list down. We can do this by considering the main Types of blockchains, their Generations, Layers & and Class. The resulting short-list should be less than 20. We’ll populate all the variables then, and maybe learn a few things along the way.

What are the main types of blockchains?

With businesses and start-ups increasingly integrating blockchain into their organization, decentralized technology has been categorized into four main types based on use case:

Most public blockchains are fully decentralized in nature, with no central authority in power. It is extremely censorship-resistant as anybody can join the network, irrespective of location, nationality or other restrictions. The nature of Public Blockchains is such that they cannot be shut down by any centralized authority or regulatory means.

A hybrid blockchain has an ecosystem with the combined features of both a public and a private blockchain network; the privacy and security of the private blockchain along with the transparency of the public blockchain. Hybrid blockchains are most ideal for businesses that must maintain a level of privacy over some types of data, while desiring to make other types of transactions public.
Many well known hybrid ecosystems are made possible by a patented interchain protocol. This function enables any chain to connect with any other blockchain protocol. This facilitates multi-chain networks that have the ability to run multiple public/private chains that leverage the combined hashpower of the network.

Consortium blockchains are also known as federated blockchains. They allow any new participant on the block to connect to the established structure and share data instead of beginning from the very start. With the help of consortium blockchains, organizations conveniently get solutions to secure their time and the cost of development.

What Generation is this Blockchain?

When reviewing blockchains, it is helpful to categorize them into generations. Typically, earlier generations have more adoption & development resources, while later generations are technologically superior but come with more risk – as they are less battle-tested.

A quick note on these layers everyone keeps talking about.  This is a very general term used to define a blockchain’s dependencies.  Typically, blockchain architecture comprises many overlapping layers such as an infrastructure or hardware layer, data layer, network layer, consensus layer and an application layer.  However, the terms L0, L1 & L2 tend to refer to how a particular chain is built & designed to operate.

In our search to find the best chain to build on it is helpful to know the basic parameters of these layers, as it will enable us to quickly filter out the chains that do not serve our needs.

Building on an L0 is clearly the best choice, especially if you need control over a custom gas token or consensus mechanism.  The only good reason to choose an L1 or L2 is time/budget constraints, wherein you may find a quicker path to market if you can find a ready-made solution that fits most of your needs.

..or perhaps; Clash of DLTs.

“Blockchains” are actually just one type of Distributed Ledger Technology [DLT].  Currently there are 2 main types of DLT.  In the near future, there are dozens of unique implementations of DLT.  Holochain, for example, is building a DHT (distributed hash table) where every node (ie. wallet) is it’s own DLT.  It’s a complete game-changer.  Unfortunately, many of the “wheels” needed to run OSP aren’t built yet (ie. cross-chain bridge/dex, NFT marketplaces, etc).  For now, we are looking at Blockchain vs. the DAG.

The Directed Acyclic Graph or DAG, is the next generation of DLT. Some consider it to be a rival technology to blockchain, others an enabler. Both blockchains and DAGs record transactions on a distributed ledger, but do so in starkly different ways.  A DAG is a network of individual transactions linked to multiple other transactions. There are no blocks of transactions in DAG networks.

If blockchain is a linked list, a DAG is a tree, branching out from one transaction to another.

Below is a quick comparison of the two in terms of benefits and drawbacks: 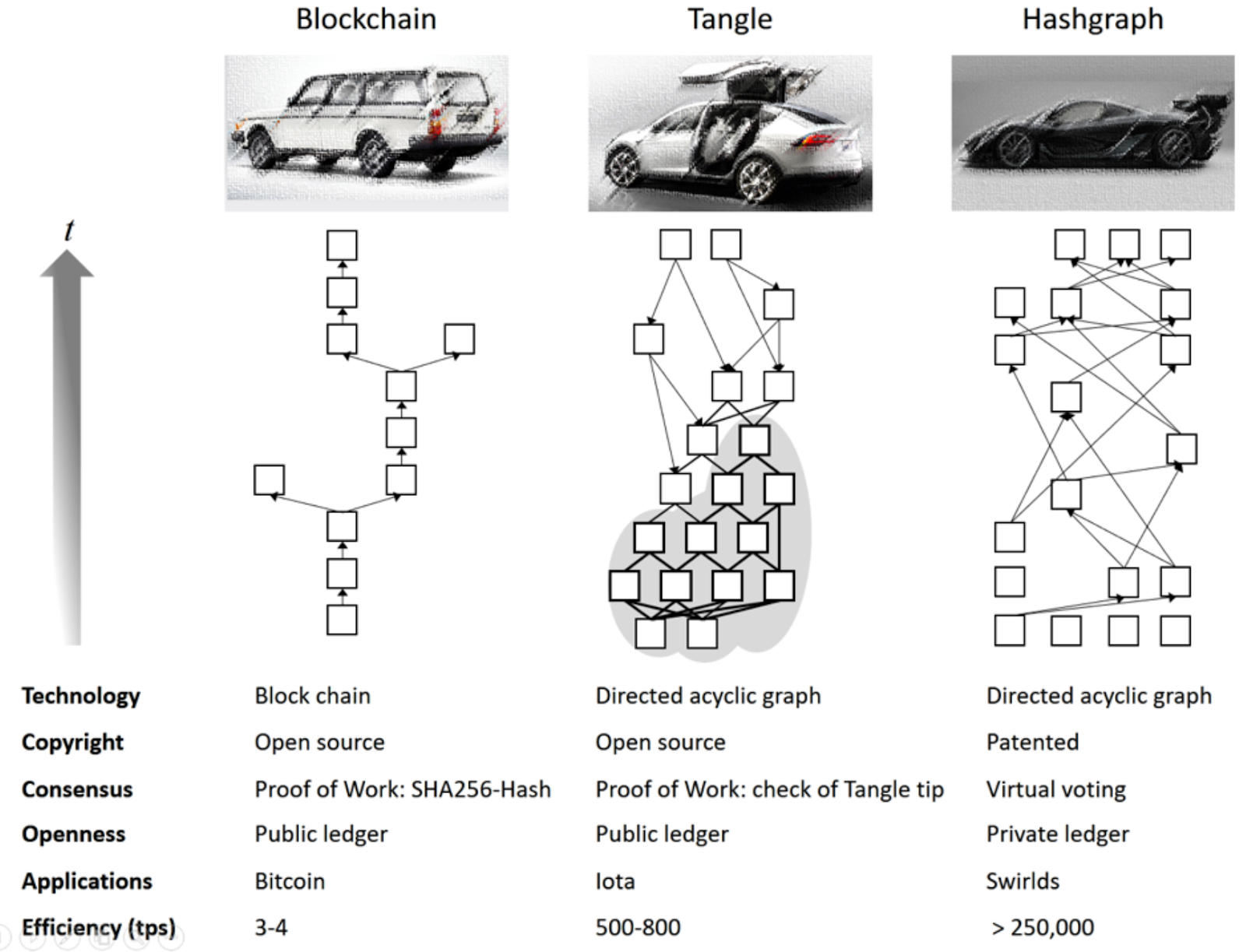 Tangle & Hashgraph are two of the most well-known DLTs. There are dozens more, most of which don’t advertise the fact (ie. Avalanche & Fantom). Gods’ know why they don’t broadcast “DAG” as a major feature, as it is clearly superior to “Blockchain” technology.

Here is another good image that illustrates how 3 different L0 chains work:

Although you can build a DAG in a Zone or a Parachain, the only true L0 DAG here is Avalanche. Illuminating…

Let’s move on to our results..

Based on OSP’s business model & the requisite features, the best Type of blockchain to build on is a Hybrid Blockchain – as this will facilitate both public transactions & private transactions (functioning as an internal &/or B2B ledger).  Given the scope of features required, it is most cost-effective to build on an L0 that is a Third or Fourth Generation blockchain.  Further, considering the demand for high transaction volumes & micro-payments with low fees; DAG is a more suitable Class of DLT than “Blockchain”.

Based on these designations, we narrowed our list down to 10:

Some of these are not actual DAGs, yet support DAG technology as ‘side-chains’ (ie. Aleph Zero on Polkadot) so they are still under consideration. Now we can populate these records with the rest of our requisite properties:

Several of these promising chains were filtered from our list for various reasons. Here are the results.

Our short-list of viable blockchains to build on is now manageable. Questions presented earlier in this document will help you determine your winner; Ease of Development, Survivability, Production Ready features, etc.

*Reminder; Every DLT project is different and there is no one chain that can be considered “best” for all purposes. In fact, just as the internet became like the Amazon; where the evolutionary advantage for survival & success evolved from Dinosaurs into micro-services & specialization – the Amazon of the DLT landscape will likely do the same. When considering the “survivability” factors of a chain, look to the ones that are starting to focus on a particular niche.

That’s all for now folks.
Please leave questions or comments at your leisure.

About Casey Jeppesen
Casey Jeppesen is the CTO of Ecovalence. With 25yrs experience in the Tech industry; he is a self-proclaimed TechGnostic, Futurist & Digital Syncretist.